FIXME Some crosslinks are still missing.

An intelligent centauroid species which developed on a misbegotten hell of a jungle world, the Aera are oxygen-nitrogen breathers, with a strong internal skeleton, smooth ashen-gray leathery skin, a decided lack of psychiatric assistance for their obviously repressed dissatisfaction with natural ecology and, at least according to the Cult of the Devourer on Mishtal Seven, a flavor remarkably similar to that of a human with a high protein diet, but only if both have been served with a nice Chianti.

Unfortunately for the Aera, their region of the jump network offers no known paths towards significant further expansion. To expand they must go coreward, passing through Human or Rlaan controlled systems. Requests to do so have been denied by both the relevant parties of both species. Opting for another method, the Aera tried to sneak a colony convoy through Rlaan space, but a lack of comprehension of the Rlaan mentality regarding civilian casualties caused this ploy to be not only a failure but a disaster, provoking the Rlaan into a military response. 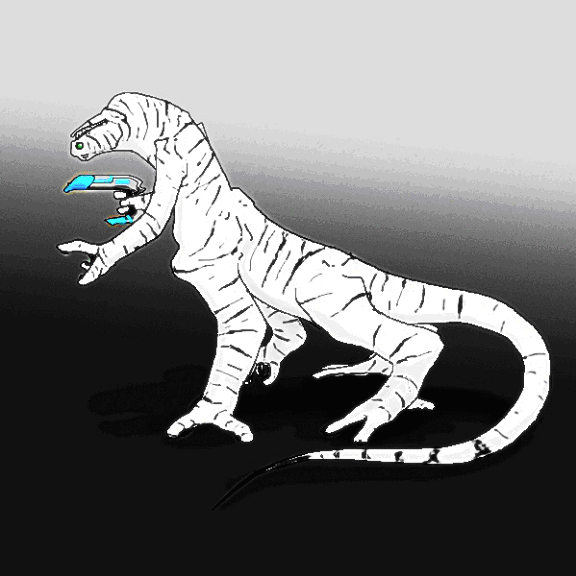 The Aera are a centauroid species measuring 2-3 meters in length from the head to the end of the balancing tail, and 1 - 1.25 meters high at the four leg- shoulders. The four stocky, sturdy running/gripping limbs provide support, and the front two limbs end in three-digit hands, with two fingers and an opposable thumb. When active, the upper body bends up from the rest of the body just past the middle limbs at about a sixty-degree angle, with the forelimbs sprouting from about two thirds of the way up the upper body, and with the head bending back down so as to be parallel with the main trunk and the ground. Aera tend towards slim, muscular builds, and are usually both quick and agile. They have two genders, each of which is similar in appearance. Among the spacefaring races, the Aera have one of the shorter natural lifespans. Prior to the advent of advanced life extension technologies, it was as rare for an Aera to reach 60 years of age as it was for a twentieth century human to reach 100.

The physical appearance of the Aera reflects upon their origins. The Aera have a smooth, leathery skin not dissimilar in appearance to the bark of a birch tree, with occasional yellowish patches reminiscent of lichens. The hinged portion of the mouth is, in contrast to that of terran species, the upper portion. The mobile portion of the mouth is also notable in that it does not consist of a bony arch, and is actually a solid bony plate. Inside this mouth are two rows of teeth, the second moving forward to replace the first as they naturally fall out, and a new second row is grown. The front teeth are razor sharp and are obviously for tearing flesh, and the next sets of teeth are likewise designed for the chewing of meat, but the rearmost few teeth have grinding surfaces, allowing the consumption of nuts, seeds, and other such vegetable matter. The corners of the mouth are usually open, and provide the normal breathing route. When exerting itself, an Aera will pull back its lips, increasing the size of the airway. The wide, narrow eyes are almost universally a milky green, with wide, narrow pupils, and are largish in size relative to the head. The eyes are above the terminating point of the downward slant of the lipline, but below the bony jaw plate. Just below the mouth, on each side of the head, is a row of small pits that are used for chemoreception. Beneath each eye is a kidney-shaped patch of lighter skin that marks the location of a tympanum. On the underside of the Aera head is a pair of organs, each capable of producing variable amplitude, low frequency vibrations, which the Aera use to communicate.

The Aera homeworld was, prior to changes imposed by the technological advancement of the Aera, a nearly seasonless planet with an oxygen-nitrogen-neon atmosphere, on whose surface were a single large landmass and many large and small islands. The mainland was nearly entirely covered with jungles and marshgroves, with only small belts of more sparsely overgrown land on the northern and southern reaches of the continent. The rich jungle land was home to all sort and manner of parasites, predators, diseases, and competitors for food. It was in this vast, dark jungle that the Aera arose into sentience, tool use, and civilization.

Aera culture is highly organized and decidedly hierarchical, but in the form of a meritocracy rather than an aristocracy. While what has constituted merit has morphed over the millennia since the first Aera tribes selected work crews to cut back the encroachments of the jungle upon their early settlements, given the relative position of the pre-technological Aera in their local food chain, there has long been a favoring of cleverness and determination over raw strength. The current social and vocational position of any Aera is immediately indicated by the color and pattern of an individual's coverall. The Aera are ruled by a subset of the highest caste, with membership in the oligarchy changing whenever either an individual steps down, or a third of the other members call for a member's replacement. New members must be confirmed by two thirds of the current oligarchy. It is much more common for members to voluntarily remove themselves from power, believing themselves more useful elsewhere in society, than to be cast out. An average stay in the oligarchy lasts a few Aera years.

The long struggle of the Aera against the erosion of their society at the hands of the natural world has instilled in them a deep respect for that which has enabled them to conquer their environment: technology. Not only is the advancement of technology greeted without fear, the social position of the artificer and the engineer is one more greatly elevated than that seen in any pre-Diaspora human society. What is feared is the unmastered and uncontrolled. Even after the last war between Aera and Aera was fought, bringing the last of the major islands under the control of the mainland, the Aera only slightly relaxed their military investment. Perhaps in large part due to their short lifespan, and the consequential rapid dying off of adherents to old theories, science advanced quickly, and with the understanding of their place in the universe came a belief that just as they had been forced to fight back against the jungle to keep themselves alive, so would they likely have to push back against all that waited for them beyond their world. Thus, eight centuries ago the Aera burst forth from their homeworld, not afraid, but determined that nothing would stand between them and their indefinite existence.

Listed below are noteworthy Aeran sub-factions and organizational groups:

The nature of the Aera homeworld never inspired much belief in any sort of loving deity. What began as a collection of local deities coalesced, through conquest by what was to be the dominant group on the entire planet, into a single pair of entities, one force of creation, and one of destruction, both abstract, and both uncaring. As time progressed, and the Aera advanced, these entities progressively lost entity status and drifted into the realm of spiritual concepts. Becoming more self-centered in their exploration of existence, destruction morphed into personal death, and creation into species survival. Organized religious activity among the Aera, such as it was, ceased centuries ago, but the impact on their culture of the concepts of death and survival is still quite strong. Indeed, Aeran mausoleums are said to be, quite possibly, the only pieces of Aeran art that might ever be considered beautiful. The Aera respect death, but value is placed on the accomplishments made in the face of one's imminent demise. All Aera are cremated, and the repositories for such remains are vast public works, filled with displays of the accomplishments of those entombed within, those who contributed greatly to the species being rewarded with physical space devoted to listing their deeds, and the rest consigned to a rotating schedule of intermittent holograms and access via terminal displays. It is in such places that an Aera would go to ponder, in silence and solitude, relenting briefly from the near tireless schedule of a short-lived species, the nature of its existence.